Giving a “performance” of a story with my sister and my cousins were the most fun and precious moments of my childhood.
We usually did this during the heyday of ‘Sinterklaas’ and Christmas. We often “told” our versions of a ‘Sinterklaas’-story or of a Christmas story.

Stories have been a part of me all my life.
So nobody was surpised that I choose to study Dutch Literature at the university and specialized in medieval literature. My graduation thesis was about “New Year’s Songs” in the 16th centure. The time of the religious wars in the Netherlands.

At first glance, each song seemed like a harmless carol. Song by the poor passing the doors to collect money or food. But if you studied them carefully, you discovered a story between the lines.
A story in which faith and the choice religion came to the fore.
A story that was much less innocent than it seemed to be.

Every story, both fictual and true, contain more layers that pass information to the storylisteners. Stories touch us consciously and they cling to our subconscious without us being aware of that most of the time.
That is the power of stories. 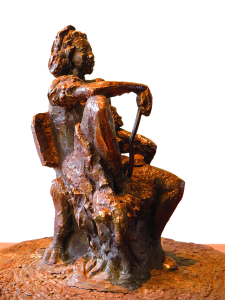 “See the world through my eyes”

March 2012 my sister passed away. She had asked me to tell a special story for her daughter and all the other children in the hall during her funeral.

Her – and our – belief was that her death was not the end, but the beginning of another connection with each other. She wanted to pass that message on to her daughter and all the other children. I then told a story that I had made myself based on some stories by Toon Tellegen from the book “Maybe they knew everything”, combined with the message, which was so important to my sister. The story is called “See the world through my eyes.”

During that service I felt the power of a story so strongly that it was no longer a question for me whether I wanted to do more with “stories”, but “how”, “when” and “where”.

A few months later I started training as a professional storyteller at the Storytelling Academy in Utrecht. To stimulate me, my parents gave me the beautiful image “Tell Lady” by visual artist Wessel Bezemer. My own company “Tell Lady” was born. They gave it to stimulate me in the step I took to make my dreams come true.

“Stories contain wisdom from a (recent) past and from the emerging future. We stay wise in the present by telling them and listening to them. ”

Every person, team and organization is a barrel full of stories

Stories make us who we are and what we do

We know stories from the past. Stories of things we have experienced. Stories we have heard. All these stories together make us who we are and what we do, as people, as a team, as an organization. Stories connect us to our “inner Self”, but they also connect us to the people around us.

I use the power and dynamic of stories to connect people with each other. But through those same stories they also connect with themselves. With their own inner wisdom.

By telling stories we communicate on multiple levels with each other. Being aware of the power of stories means that we all live more authentically and generatively at the same time. As a result we all can be more valuable to ourselves, to each other and to our planet.

It is my mission to let people I work with experience the power of their stories by accompanying them on their journey through the four levels of these stories. So that they all can live and work in their full sparkling light and be a treasure to the world

I am curious about your story!

Stories create stories. For me living authentically and generatively means that I want to remain curious. Share your story so we can learn from each other

Let’s meet up
Scroll to top